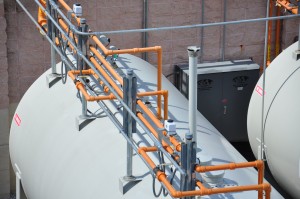 Look out for thermal expansion! That was the advice from a service technician who specializes in generator fuel systems. It was some years ago, while discussing a fuel-oil system for a generator, that I was reminded about the potential for leaks due to thermal expansion in fuel oil piping systems. This issue is particularly challenging in locations where fuel piping is exposed to wide temperature variations within a relatively short time frame. Florida provides a good example.

Summer daytime temperatures in Florida often come close to 100° Fahrenheit, and exposed fuel-oil piping can see tremendous temperature swings from night to day. And, as Florida residents know, our winter weather is characterized by passing “cold fronts” which can drop ambient temperatures by 30 degrees in a few hours. Our cold fronts sometimes last only a day or two, with warmer temperatures returning for several days before the next front arrives. When designing fuel distribution systems in Florida, few engineers worry about diesel fuel freezing, although it does happen on a few very cold nights every year (yes, upper-20’s is cold!). For installations in Florida, and other regions with a similar climate, I would argue that the main concern with fuel-oil piping and temperature is thermal expansion.

Not long ago I was asked to look into a fuel leak that had been found inside the cabinet of a fuel filtration system. The leak originated from the broken glass on a flow gauge. There were no obvious signs of tampering so everyone suspected an over-pressure condition, but a look at the pressure rating on the flow gauge indicated “150psi max”. This raised some eyebrows, as generator fuel-oil transfer systems are normally designed for 50psi pressures, and this system was operating at less than 30psi. So, why did the flow gauge fail?

Thermal expansion in a fuel system – what causes it?

As a fuel pump runs, cool fuel is drawn from a bulk storage tank and circulated throughout the fuel piping system. When the pump stops, some amount of fuel will remain in the piping system, some of it trapped between two closed valves. If the piping is above-ground and exposed to higher ambient temperatures, the fuel will expand, often exceeding the capacity of the carrier pipe. It is the expansion of this trapped fuel that leads to an excessive pressure build-up, and the eventual fuel leak at the weakest point in the system.

The coefficient of expansion for diesel fuel is 0.00046 per degree Fahrenheit, or roughly 1% per every 20°F increase in temperature.

In the case mentioned above, a detailed review of the fuel piping pointed to the possibility of thermal expansion. After meeting with the facility owner and conducting a review of the alarm logs, it was concluded that the fuel filtration system had started its normal cycle in the early morning hours and concluded it by mid-afternoon. As the system went idle, a volume of “cool” fuel remained trapped in a long run of the above-ground piping, between an electrically-operated valve and the inlet to the fuel circulating pump. In the afternoon hours, this section of piping had exposure to direct sunlight and much higher ambient temperatures. The subsequent heating of the fuel within the pipe led to thermal expansion and, with nowhere to go, a leak found its way by blowing out the glass on the flow gauge.

Over the years, I have heard of installation contractors chasing a fuel leak that keeps showing up in a seemingly random manner. It can leak at a ball valve at one moment, and then at a different point several days or weeks later. The technician tightens and retightens everything, only to have the leak surface again and again. It can be very frustrating and upsetting to a facility owner. Nobody likes fuel leaks!

Keep in mind that these valves are usually set at a higher value than, and are not intended to replace, the normal pressure relief valves or pressure regulating valves installed on the discharge side of fuel transfer pumps.

Here are some common places where you may need a thermal expansion pressure relief valve:

1. Between a multi-tank remote fuel fill station and the motorized valve used to select a given tank for a fill event (fuel can be trapped between a closed outlet valve at the fuel fill station, and a closed motorized valve).
2. In the piping run between supply and return valves connected to a fuel filtration system in a multi-tank application (fuel is trapped between the fuel filtration pump and the motorized valves).
3. Between a check valve or foot valve, and a solenoid or motorized ball valve (i.e.: between a bulk tank and a day tank’s inlet).

And here is another way to attack thermal expansion. In lieu of a pressure relief valve, if the fuel oil system includes an automatic controller for electrically-operated valves, you may choose to specify that pressure sensors in the piping be used to initiate the momentary opening of one or more electrically-operated valves, therefore allowing trapped fuel to return to a source tank. For example, in a fuel filtration system, where a pump draws fuel from a bulk tank to circulate it through several filters, the system controller can be programmed to monitor excess pressure (when the system is idle) and to signal all valves to open for a few seconds to relieve the excess fuel pressure.

I hope you found this article helpful in reminding you about this basic design element. As always, thanks for reading, and please share any comments or questions below.

2 thoughts on “Here’s the most likely cause for that leak in your fuel piping system.”

Luis Silvestre
Scroll back to top